There had been nearly millions of photographs taken from the World War 2 ear but only a handful of them had became famous wand all that is due to the fascinating facts surrounding their origins. Some of these fascinating snapshots from World War 2 with their fascinating origin stories are down below.

This above photo is of the German 13th Waffen-Gebirgs-Division der SS Handschar, a brigade comprised of only Bosnian Muslim Nazi soldiers. They were only enlisted in the army because of them bring of the Aryan descent instead of being from the Slavic one.

Shaving the Hair of French Women

After France was liberated from German Army in the last days of World War 2 many of the French citizens who supported the German invasion, had their heads shaved in public as a sign of humiliation. Almost 20,000 French citizens had their heads shaven and majority of them were even women. The public shavings were carried out by locals or members from French Revolution.

Raising a Flag over the Reichstag

The above picture is of a Russian soldier waving the Soviet Union flag over the Reichstag, after the defeat of German army. Photograph was taken by Yevgeny Khaldei, the renowned photographer of the era. Photographer took 36 different photos of this flag rising to propagate the Russian propaganda that they were the reason for Germany’s defeat.

The Weeping Woman of Sudetenland

The above photo is taken back in October 1938 in the Sudetenland, Czechoslovakia; with a woman weeping and holding one hand on her face while other was holding a handkerchief while waving it. German’s published this photo wit caption saying that woman was overjoyed wit German invasion while USA published the same photo with caption in newspaper stating that woman was miserable and was only forced to salute Hitler.

In 1940, German army finally invaded the France who was supposed to have best army in the World War 2 and all of Europe. The picture was taken to show the misery of the Frenchmen. The man in the photo is believed to be one named Monsieur Jerome Barrett who was weeping in the streets as the flags of France were being ton from tops of city and were transported to Africa.

The Prisoner Of War Olympics

While Olympics of 1940 and 1944 could not be held due t ongoing war, several of the prisoners of wars held their own secret Olympic completion in POW camps in 1944. 369 prisoners from the Woldenberg Camp participated in many Olympic Games. The flags were made from bed sheets and even the German solders saluted to these Olympic flags. Winners were awarded with medal made from cardboard. 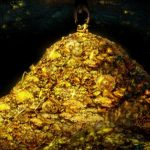