A lot of historical figures have been accused of having STDs. Before doctors could properly diagnose a disease like, say, syphilis, it was easier for someone with a grudge—like a political opponent, for example—to spread nasty rumors about someone’s health, especially if it was already in decline. There are a ton of people from history who had STDs, of course, but they’re not necessarily the big names you may be thinking of. So which famous people definitely had STDs? Read on!

Famous gangster Alphonse Gabriel “Al” Capone (1899-1947) was suffering from an advanced case of syphilis when he was released from prison in 1939. He checked into the Union Memorial Hospital in Baltimore for treatment using the totally smooth and inconspicuous fake name “Mr. Martini.” When the media found out “Mr. Martini” was actually Mr. Scarface, doctors hid his condition by claiming he had a “nervous system disorder.” His New York Times obituary didn’t mention the syphilis, but it did mention he died from paresis, a severe neuropsychiatric disorder often caused by syphilis.

Famous occultist Aleister Crowley (1875-1947) contracted gonorrhea as a teenager. Or, as Crowley later wrote in the margin of one of his own books: “I caught the clap from a prostitute in Glasgow.” The incident led to Crowley getting booted from the Tonbridge School in England. He also later caught syphilis from a (different) prostitute while attending Cambridge.

Stage and screen actress Tallulah Bankhead (1902-1968), said to have a baritone “steeped as deep in sex as the human voice can go without drowning,” once had a case of gonorrhea so bad she had to have an emergency “five-hour radical hysterectomy.” As recounted in The New Yorker, she allegedly later said to a doctor, “Don’t think this has taught me a lesson!” She checked into the hospital complaining of an “abdominal tumor,” and was surprised to discover it was actually a venereal disease that nearly killed her. She weighed only 70 pounds when she got out of surgery.

Fashion icon George Bryan “Beau” Brummel (1778-1840), known as “The First English Celebrity” and “The Ultimate Dandy,” died of syphilis at the age of 61. He popularized what later became the modern men’s suit, with full-length trousers instead of stockings. Brummel had “balletically exact deportment and almost unprecedented personal cleanliness” as a young man, but died in an asylum “drooling and doubly incontinent.” His biographer argues that it is “unlikely” the disease “points to anything other than a fairly active, though ill-considered, sex life.”

Confederate army general Ambrose Powell “AP” Hill, Jr. (1825-1865) contracted gonorrhea in 1844, while he was a cadet at West Point. He missed so many classes he had to repeat a year, graduating in 1847 instead of 1846. This so-called “youthful indiscretion,” his biographer surmises, gave Hill a “cruel” case of prostasis (inflamed prostate) and made him less effective at the Battle of Gettysburg and other skirmishes. Hill died on the frontline at the Third Battle of Petersburg when a “.58 caliber bullet sliced off Hill’s left thumb before piercing through his heart and exiting the back.”

Billionaire and Hollywood mogul Howard Hughes (1905-1976) was known as a playboy, and as an adult, he bolstered his passions for aviation and films with romancing (or seducing) the many women he encountered along the way. Hughes suffered multiple head injuries from plane crashes in addition to paranoia and other mental incapacities including tertiary syphilis, but his ultimate death was kidney failure at the hands of a codeine overdose.

Famous diarist and Dr. Samuel Johnson biographer James Boswell (1740-1795) had “19 or more attacks of gonorrhea” throughout his life, despite using “an animal gut condom in his liaisons with prostitutes.” His wife kept a diary, too, noting that one day James showed her “a testicle swelled to an immense size” that she reluctantly agreed to treat with a poultice “every night and morning.”

Famous stage actor Maurice Barrymore (1849-1905), great-grandfather of actress Drew Barrymore, was diagnosed with syphilis in 1901 after he “became suddenly insane” while performing in New York. He shocked the crowd when he launched into a Mel Gibson-style “blasphemous attack on the Jews” and got so emotional that “tears rolled down his face.” He spent the rest of his life in institutions, where he fought attendants and even tried to strangle his daughter. He died in his sleep at a private sanitarium. 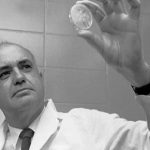 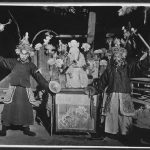