There are hundreds of thousands of places on earth that we still haven’t been able to explore, especially places that are buried underwater. Scientists and archeologists are still looking for the lost city of Atlantis that sank into the sea in a single day.

Just like Atlantis, a number of Archeological cities and artifacts have been submerged in water either by the power of nature or because they needed to be sacrificed to provide additional power to the growing populations around it.

Either way, we’ve put together a collection of historical places that have been buried underwater and are now resurfacing!

The Village of Epecuen, Buenos Aires

A few miles southwest of Buenos Aires the tourist village of Epecuen is resurfacing after spending more than 50 years underwater. Back in the 1920s, the village of Epecuen was built on the shore of the Salt Lake “Lago Epecuen” and it became a home to more than 5,000 people by the end of the 1970s. During that time, the weather was becoming more and more abnormal over the years and it brought more rain than unusual to the surrounding area causing the Salt Lake of Epecuen to overfill.

The El Niño phenomenon re-surfaced a whole city that was submerged for more than 30 years. Potosi was a small town in Venezuela that was purposely flooded by the local government in order to build a hydroelectric dam in 1985.

Approximately 30 years later, the water level dropped significantly due to the drought that the El Niño phenomenon brought causing the whole city to reemerge. The town’s church which was submerged underwater leaving nothing but the cross visible was now entirely visible alongside the nearby cemetery.

Jal Mahal, otherwise known as the Water Castle, is a palace located in the middle of the Man Sagar Lake in the city of Jaipur in India. It was built approximately 300 years ago. It is a 5 story building with 4 floors submerged underwater. The government of Rajasthan started a 6-year renovation project with the best architects in the country in order to restore it to its past glory. It is now open to the public and tourists can visit the balconies and explore the castle on boat tours.

in Macedonia lies the Mavrovo Lake, a national park which is famous for the submerged church of Saint Nicholas. This ancient church was built during the 1850s and stood for more than 150 years until the Greek government decided to build an artificial lake around it to supply water to the local power plant. In 2003 the church was fully submerged underwater, but due to climate changes in the area, it is now resurfacing. In the summer months, more than half of the church is visible.

This beautiful lake that looks like a surreal photograph is actually the Grüner See, otherwise known as the Green Lake. It is located in Austria and is famous for its crystal clear waters and emerald green colors that it gets from the surrounding grass and leaves. During the winter, the lake becomes very shallow (1-2 meters deep) and the beautiful national park emerges. It is now a famous attraction for hikers and campers. However, during the summer due to the ice melting in the spring months, the park is filled with water, transforming the park into an underwater paradise.

During the springtime, the reservoir supplies the water that it’s been collecting during the winter to the surrounding area causing the water level to drop, exposing the beautiful island! The island is submerged underwater for 9 months of the year and is fully visible in spring when the water level drops to 168 meters.

Decades later due to climate change and the droughts that happened in Mexico over the past 10 years, the Temple of Santiago re-emerged from the water due to the water level dropping by 82 feet.

These striking images might seem photoshopped but actually are not

This is How Modern Technology Made Our Lives Insanely Weird 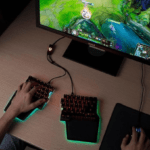