Users of Amazon Alexa might now be able to hear a little bit of emotion in Alexa’s Voice, which seems a little robotic, very soon. Amazon made the news announcement that very soon Alexa will be able to respond to the questions from US-based users in the excited/happy or the empathetic/disappointed tone.

For those of you who want a little teaser of the different Alexa voices, Amazon has currently shared the videos for nearly 3 examples. Three videos for each emotion with the increase in level for the disappointment or excitement are down below.

This is not the first time that Amazon has made some improvements for Alexa Voice. The company launched the newscaster like Alexa Voice for the US users earlier in January. However, this time Amazon has also announced this time that developers will be able to use another topic-focused new voice for discussing music. Both for these voices have a slight intonation difference as well as a flow more than the standard Alexa Voice. These new voices actually sound a little bit more close to that of a Radio DJ or a Newscaster’s voice that one often hears on the radio.

Users for Amazon Alexa can now also make the comparison of Alexa’s voice with the radio DJ-like and newscaster voices down below.

News (US) in Standard Voice:

News (US) in Speaking Style:

Music (US) in Standard Voice:

Music (US) in Speaking Style:

Amazon also released the news that the developers will also be able to enable the newscaster voice in the Australian accent. 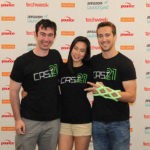