On early Friday morning last week, the view on the Los Angeles 210 Freeway looked like a certified scene of hell. The hills near the freeway were being swept away with waves of the fiery orange-colored embers and then swept all over the place.

Footage has been captured of the hellish scene by the KTLA News which presents a clear view of the fiery weather as the flames are propelled and the embers are being hurled toward the parched bushlands of South California. The bushfire has been named as “Saddleridge Fire”; a vicious fiery blaze that has brunt the land of nearly 4000 acres located in San Fernando Valley. The fiery disaster led to the destruction of an unknown number of local houses and resulted in the evacuation of 12700 houses on Friday alone.

The video presented by the KTLA News shows the fire intensified by the raging winds gathering the embers and then carrying them downwind. These little embers in a collective manner led to the igniting of even more flames. This phenomenon is named “Ember Spotting” which is an effective yet deadly way for such wildfires to massively spread in a short amount of time.

A fire scientist based at the University of Maryland’s Department of Fire Protection Engineering, Michael Gollner said that the footage of ember spotting he saw in the video down below is among the most intense incidents of the phenomenon he ever saw anywhere.

Gollner said, “The winds were flowing so extreme that the embers can be seen rolling on the ground as they went everywhere. Once something like this specific case starts to occur, there is little to none that humans can do to prevent it.”

#SaddleRidgeFire Look at this embercast across the 210 freeway!!! Fire has jumped in multiple spots. Imminent life threat! pic.twitter.com/jDNjVEaldh

In Southern California, it is a peak of the fire season as the winds of the Santa Ana start blowing from the Great Basin Desert and then rush on the slopes downward resulting in fanning the dry winds of the land. Then all there is to start a fire, is a little spark.

Gollner said, “There is not much needed to start the fire.”

In the last 20 major fire cases in the history of Golden State, 11 of these were caused by humans and that includes 4 from failed powerlines. As for the cause of the Saddleridge Fire, it is still unknown at the moment.

In order to prevent any more fires caused by powerlines, the major power utility by the name Southern California Edison has cut off its power services to nearly 21000 customers or roughly to 55000 residents of the area.

In addition to the unexpected fires caused by the autumn weather, these fires have recently been boosted by the climate changes. The weather is becoming warmer and warmer each year which means that the conditions for the fires to ignite are becoming riper too.

The amount of land burned as a result of fires in California has increased to nearly 5 times since 1972. 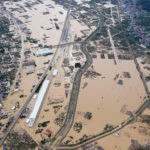