Cartoons and comics have lived in our hearts since childhood. Back in the day, or maybe even now, we wanted to live like our favorite cartoon heroes by living in their houses, going to their schools or helping them to do their work. After many years, we’ve gotten a chance to actually put ourselves in this fictional world! Snow White’s cottage with its “melting” roof, the life-size SpongeBob pineapple house, and a cozy, eco-friendly hobbit’s hole… all of these houses came to life to make our dreams come true.

Today, we want to show you a few exact replicas of fantasy homes that everyone can actually visit.

So scroll down to look for yourself at these Amazing real-life houses built on designs of cartoon houses.

Back in 1997, 20th Century Fox had an unbelievable promotional idea: to create a full-sized, livable replica of The Simpsons’ house in Nevada, USA, and give it away in a contest. It cost approximately $120,000 to build the real-life house with identical features of its cartoon version, both inside and out. However, the contest winner took the $75,000 cash prize instead of the house.

The house from the movie, Up

Carl and Ellie’s small, adorable and colorful house was so popular and inspiring, it was actually built in 2011 as a part of one little girl’s Make-a-Wish Foundation wish. It was designed with accuracy and attention to every small detail. Right now the house is situated in Utah and can be visited by tourists, so everyone can take some nice shots.

There’s no need to dive into deep waters to see the SpongeBob Square Pants’ house since the exact replica of it already exists on land and has everything we’d want to see in it like underwater decor, a rusty TV, a shell phone, and even a life-size replica of Gary! This villa was created by Nickelodeon and Nick Resort Punta Cana and is located in the Dominican Republic.

This adorable Minnie Mouse house can be found at Mickey’s Toontown in Disneyland both in Florida and California. It’s fully equipped inside, just like a real house!

The builders spent 30 years to create this masterpiece. The house is located in Washington and has no square corners anywhere, the wood beams are hand carved, the roof looks as if it has melted over the structure, and everything is just as rough and character-filled as anything Walt Disney drew.

The Jetsons’ apartment, in particular, was inspired by the Chemosphere, a famous building in Los Angeles.

The Bruce Wayne Manor in the DC comics about Batman was inspired by Wollaton Hall in Wollaton, Nottingham, England. For the film, The Dark Knight Rises, Wollaton Hall served as Wayne Manor.

Mesmerizing landscape photos that seem to be taken on another planet

Ghastly troubles that make every girl weep once in life 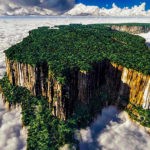 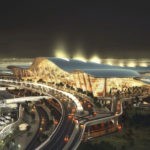