There are many sad stories about the Titanic, but there are also many heroic stories of survival. If it’s remarkable for an adult to have lived through this terrifying event, it is even more amazing that children lived through the sinking of the Titanic. We can only imagine how scared these kids were and how this event changed their entire lives. In this list, we will discuss ten children who survived the sinking of the Titanic.

William Carter, or Billy, was 11 years old when he first stepped onto the Titanic. Billy was a first-class passenger, and the Carters were among the richest families on the Titanic. The night the Titanic struck the iceberg, the Carter family went in line to get on a lifeboat. Billy’s mom and sisters easily made it onto the boat, but Billy was told he was too old. Reportedly, Mrs. Carter thought fast and disguised Billy as a girl so he could get on. With some luck and quick thinking, this 11-year-old boy was able to survive one of the world’s greatest tragedies.

Robert Spedden was six years old when the Titanic crashed into the iceberg. He was on the ship with his mother and father. Spedden is a famous young boy from the Titanic because after the event, his mother wrote a book called Polar the Titanic Bear. Thanks to the calmness of his mother and his nanny, Spedden was unconcerned on his trip off of the Titanic. Spedden and his mom also got very lucky when leaving the ship. They were on one of the last lifeboats off the ship and were the last woman and child in sight, so the rest of their lifeboat was filled with men. Spedden actually fell asleep on the boat during the ride away from the sinking ship.

Jean Hippach was a 16-year-old girl who was traveling on the Titanic with her mother. On the night of the collision, Hippach slept through the initial crash. Eventually, Hippach and her mother made it to the top deck to board a lifeboat. They did not get on one of the first ones, though, because they believed they would be safer on the Titanic than in one of the boats. One of the ship workers made them get into a lifeboat.

Madeleine Violet Mellinger was 13 years old and was a second-class passenger when the Titanic left port. Mellinger was traveling with her mother. During the night the Titanic hit the iceberg, Mellinger was jarred awake by the sound of the crash. They both headed up to the deck to get on a lifeboat. Once they got onto a boat, Mellinger remembered feeling sorry for those still waiting for a lifeboat and wishing that they could all pile into hers. She remembered the rockets shooting off from the ship, looking for someone to come and help them.

The night that the Titanic sank, Mr. Navratil and his two young sons were aboard the doomed ship. Mr. Navratil had lost custody of the boys to his estranged wife, so he had decided to run off to the United States with them. Before putting his sons onto a lifeboat, Mr. Navratil wrapped them up in a blanket to keep them warm and said his goodbyes. The boys lived, but Mr. Navratil did not. A woman passenger volunteered to take the boys with her back to New York to keep them safe until they could figure out what to do with them. Luckily, the boys’ mother saw a picture of them in a newspaper in France and was able to go to New York to retrieve them.

When the Titanic was making its voyage to New York, Millvina Dean was only two months old. This made her the youngest passenger on the ship. During the night of the crash, Millvina, her mother, and her brother all boarded a lifeboat and made it safely to New York. She became the last person to die after surviving the Titanic in 2009, having lived to the age of 97.

Mary Conover Lines was 16 years old when she was aboard the Titanic. She was traveling with her mother, and they were going to the United States to attend her brother’s graduation from college. The two were in the reception room of the ship when it hit the iceberg. She later discussed how the crewmen were very calm as they helped everyone into the lifeboats, even though they knew they were going to lose their lives that night.

John “Jack” Thayer’s story is one of the most thrilling from the sinking of the Titanic and one of extreme luck. Thayer, 17 at the time, was traveling with his parents and made some friends on board the ship. The night the Titanic hit the iceberg, Thayer and one of his friends were separated from his family and made their way to get onto a lifeboat. Thayer and his friend decided that they were going to have to jump into the ocean before the ship sank to have the best shot at surviving. Thayer hit the water’s surface and, when he finally came up to the surface, pure luck took over. He’d surfaced right next to an upside down collapsible lifeboat from the ship.

Eva Hart was just seven years old when the Titanic collided with the iceberg. She was traveling with her mother and father on the great ocean liner. Hart and her mother were able to get on a lifeboat and survived, but her father was lost to the deadly cold ocean.

August Abrahamsson was 19 when he was on the Titanic. He was a third-class passenger on the ship, and he was traveling with his parents and two siblings. During the night of the crash, Abrahamsson left his room late because he didn’t believe there was a problem with the ship. Since he waited so long to leave his room, he could not get a life belt. Since he was 19 years old, it was going to be hard for him to get into a boat. Luckily, he was able to board the last lifeboat to leave the ship. 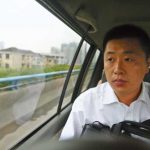