It is unfortunate but quite a lot of people who visit the zoo; they leave their common seen at home.  They tend to forgo the rules about not feeding, petting and taunting of the animals. However, there are some people who actually go a step beyond when it comes to abandoning the rules set by zoo regarding the safety of visitors and animals.

There had been many horrible incidents in the past regarding such disobeying of rules. Like the one where a gorilla named Harambe getting killed because a 4-year-old little girl fell into its enclosure or the woman who got attacked by a jaguar after she stepped inside the barriers.

Now there is a video of a woman going viral on social media which shows her taunting a lion inside its enclosure.

Earlier this Sunday, an Instagram user by the account name Realsobrino posted one shocking video on his account in which a woman can be seen inside the enclosure of a lion that was brought for an exhibit at the Bronx Zoo.

Either this woman was plain stupid or was just ignorant about her safety; as she had no idea how dangerous this Apex Predator was while she tried to grab its attention by taunting it standing inside its enclosure right in front of it.

Luckily for this woman, the lion remained unfazed by her and stood only a few inches away from her as she waved at the lion s well as danced for getting its attention.

The animal did not attack this mad woman who was then escorted out of the zoo instantly. As for now, she is wanted by the police for the charges of trespassing.

This is the video of the moment a woman starts waving at the lion inside the enclosure and then dancing to get its attention.

While visiting a zoo, one should always remember that animals like the predators are kept in enclosed spaces because of how dangerous they are. Nobody knows when something can tick them off. It is best to follow all the rules set by the zoo officials when seeing these animals. And without a doubt, do not follow in the footsteps of this mad woman who was only inches away from a situation that could have gone from “Bold To Bloody”. 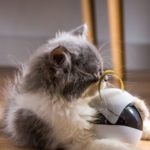